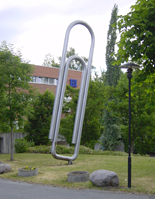 There were six cases of Equiptment in OhioLINK the other day, which makes it a "low probability" typo on the Ballard list, if somehow an understandable one. (I'm not trying to be funny here, but perhaps it's the word quipped that prompts us to hear a T in there.) I have a coworker who collects varieties of his favorite piece of office equipment, the lowly paper clip. I don't know how he feels about the lofty public art with which we're also well equipped, but at Wikimedia Commons I found this example of both those things in one: "Giant paper clip at BI Commercial College near Oslo."

I *must* comment on this - I lost the school-wide spelling bee in 5th grade because the moderator pronounced the word as "equiptment" - so that's what I spelled. I even tried to contest it, but the school administration pretty much said I was whining and/or a sore loser.

Winona, I too, have been wronged by this.
In a 'blind spelling test' we would have to spell the words the teacher said then mark ourselves. I spelled it 'equipment', and it was corrected to 'equiptment'. So from then on, I always made note, it included a 't'.
And now I'm a dumbass adult who carnt speel.

I remember it being spelled equipment.