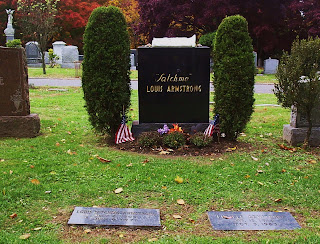 During his extended period of living in Europe, Mark Twain once attended the grand opera, and someone made the mistake of asking him how he liked it. "There were sounds, the likes of which have not been heard since the night the orphanage burned down." A more modern music critic, Yogi Berra, was asked the same question under similar circumstances. "That was great. I even liked the music." Musican follows the well-known path of a missing 'I' at the end of a long word. It is found on the C, or Moderate
Probability, section of Typographical errors in library databases at http://faculty.quinnipiac.edu/libraries/typoscomplete.html . This means that it had between 8 and 15 hits in OhioLINK at the time of its discovery. We checked this morning and found 13. Also, there were 92 hits in WorldCat.
Today's photograph shows the grave of Jazz Legend Louis Armstrong at the Flushing Cemetery in Queens, New York. The original can be seen at http://www.pbase.com/terryballard/image/89132925
Posted by librarytypos at 4:31 AM