"When angry count to ten. When very angry, swear." This timely advice came to us more than a hundred years ago from Mark Twain. The typo temperment is found on the B, or high probability section of Typographical Errors in Library Databases at http://faculty.quinnipiac.edu/libraries/tballard/typoscomplete.html, meaning that it was found at least 16 time 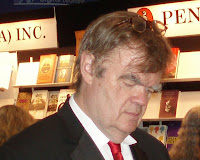 s in OhioLINK at the time of its discovery. Missing vowels are the most typical form of typo to be found in an OPAC, but temperament is also a word that people aren't sure how to spell. Evidence of this can be found in Google, where temperment is present in almost a million web pages. By way of comparison, temperament is in 10 million sites. We cannot stress this enough - check each individual record before you make a change. There is always the chance that the typo was in the original and an alert cataloger marked this with a "sic."
Posted by librarytypos at 5:38 AM