"I left the university as I entered it - fired with enthusiasm." This came from Clark Kerr, who was Chancellor of the University of California at Berkeley during the free speech controversies. Once again we go to the well to find a typo that consists of a missing 'I' at the end of a long word. In this case, the typo is on the A list, meaning that it was found more than 100 tim 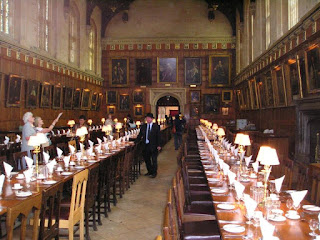 es in OhioLINK at the time of its discovery. We looked this morning and found that there were more than 170 hits for Universty in OhioLINK, but fewer than that in WorldCat. If this is not present in your catalog, then someone is doing a good job. Even if it is there, it could be due to the fact that the typo was in the original, marked with a 'sic.' For that reason, we always urge librarians to check before making a change.
Today's photograph shows the dining hall at Christ Church College in Oxford University. If the room looks familiar, that may be due to the fact that it was used as a location in the Harry Potter films. The original can be found at http://www.pbase.com/terryballard/image/49333977 .

Posted by librarytypos at 4:53 AM