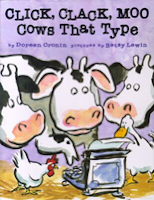 There was a time when using a typewriter would cast you as being on the cutting edge of technology. But today you would undoubtedly be typecast as a hopeless Luddite. Inlud* appears 17 times in OhioLINK and is thus included in the "high probability" section of the Ballard list. Inlcud* gives us something to chew on too, showing up an additional 17 times. We found ten instances of Incuding and five of Incuded (two of which were typos for induced) as well. So honk if you like typing. Create your own in-crowd. You can even call it a clique if you like. (Cover illustration from Click, Clack, Moo: Cows That Type, by Doreen Cronin and Betsy Lewin.)

P.S. Right after composing this entry, I saw an item in the paper about a new keyboard that mimics the sound and feel of a typewriter. But without the inky ribbon, jammed typebars, and little bottle of Wite-Out at the ready, it just wouldn't be the same now, would it?

You can include me amongst those nostalgic for the click-clack of typewriters. I've conveniently blocked out all memories of jammed keys and ribbon tangles.

I very much enjoy this blog. I learn something new with every entry.