"What would we say if the Chinese sent a gunboat with their marines up the Mississippi River claiming they were protecting their laundries in Memphis?" This question was posed by Will
Rogers quite some time ago. We were surprised to find that a typo for Mississippi has never been covered in these pages, even though there are quite a few examples in Typographical Errors in Library Databases at http://faculty.quinnipiac.edu/libraries/tballard/typoscomplete.html . Mississipi is found on the B, or High Probability list. This is borne out by a check of WorldCat, which show 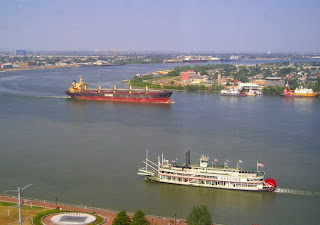 s more than 1000 hits for the error. It is a classic typo with a missing letter at the end of a long word. My mother learned the correct spelling of Mississippi as a song, in the same way that those of us who grew up in the 1950's learned the spelling of encyclopedia from a cricket.

Today's photograph shows boat traffic on the Mississippi River in New Orleans. The original can be found at http://www.pbase.com/terryballard/image/62614374
Posted by librarytypos at 6:52 AM

I have just recently started reading this blog and have found immense satisfaction in cleaning up one typo a day. It's great! Thanks for doing this.