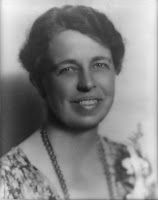 Twice recently, once at the bank and once at the grocery store, I've been taken for and spoken to as though I were somebody else. ( I resemble that remark!) And there was another time too, many years ago, when I was repeatedly informed that I had a look-alike freely roaming about town. One night in an auditorium, I saw my doppelgänger firsthand: she was up in the balcony and I was seated down below. (I'm not absolutely sure that that was her, but I'll bet it was.) Eleanor Roosevelt used to write a newspaper column called "My Day" that chronicled her travels and speaking engagements and thoughts on various things. In 1954, she traveled to Fayetteville, where there supposedly lived a woman who was a dead ringer for the former First Lady. On February 19, Mrs. Roosevelt began her column by announcing: "To my regret I never had time in the day I spent in Fayetteville to meet my double." Eleanor Roosevelt was one of a kind, but it would have been kind of fun had she been able to make the acquaintance of her Arkansas counterpart. We found five cases of Fayettville for Fayetteville in OhioLINK this morning. Try and find some time today to meet this typo, which contains three sets of twins: two E's, two T's, and two L's. But please keep in mind that the word properly spelled has three E's, not two.

I love your stuff and really hate to mention that most probably Eleanor and Franklin did not travel together in 1954, as he died in 1945. Perhaps he too had a doppelganger?
Thanks for all the interesting items you share with all of us.

Thanks for the kind words and the kindly worded correction. I've revised the blog entry accordingly.