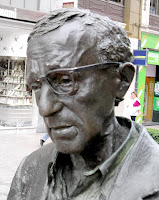 Some folks regard "natural" food as the opposite of "real" food, which is quite unfortunate, really, but virtuous vegans and tasteless tofu fanatics may have no one to blame but themselves. In the movie Annie Hall, Woody Allen's character Alvy Singer moves to Los Angeles to be with Annie and finds himself in a health-food restaurant ordering "the alfalfa sprouts and, uh, a plate of mashed yeast." It's a very funny send-up, but the truth is Woody Allen has always been interested in health food and eating right. Like all of us, he would like to be immortal, or at least senescent, but the rules for better and longer living are clearly not carved in stone. In the movie Sleeper, Allen plays Miles Monroe, owner of the Happy Carrot Health Food Store in Greenwich Village, who awakes after having been frozen for 200 years to discover that "deep fat and hot fudge" are now known for their health-giving properties. (Hilarious, yes, but with a grain of truth: nutritional truisms are constantly being revised and both chocolate and "good fats" are currently considered healthful.) We found four instances of Natureal (for natural) in the OhioLINK database this morning. Look for it in a catalog near you and make sure it's got the real spelling and not the spelling that says real.