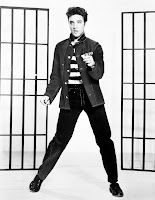 Elvis Presley was very telegenic, but in the last of three appearances on The Ed Sullivan Show, he could only be televised from the waist up, due to outrage on the part of the Catholic Church and various reporters who compared his style to that of "the blond bombshells of the burlesque runway." (Elvis scorned such attempts to rein him in; he even mocked the media by donning a harem outfit for one of his numbers on the show.) The King would have turned 75 last month, but to fans he will always be that hip-swiveling, lip-quivering, boundless ball of sexual energy and doe-eyed vision of post-pubescent pulchritude, which even back then had to be half-imagined. My favorite Elvis lyric goes: "I'm itching like a man on a fuzzy tree." (Go ahead and censor his nether parts if you will—who needs to actually see the fuzzed-out region after being given a phrase like that to chew on?) Elvis was both an audio- and a visual experience. He really knew how to tell it like it is. We found 17 cases of Telvis* locked up in OhioLINK today. Rehabilitate 'em by adding an E for Elvis.

(Screenshot of Elvis Presley in Jailhouse Rock, 1957, from the Library of Congress and Wikimedia Commons.)