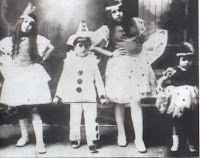 In 1944, Maria Eva Duarte met her future husband Juan Perón at a Buenos Aires charity event for earthquake victims in San Juan. She was born in 1919 to a single mother in the Argentine countryside and moved to the big city when she was 15 years old to pursue an acting career. She married Perón in 1945; he was elected president the following year. The first lady founded the Female Peronist Party and played a large part in the promotion of trade unions, labor rights, health issues, and women's suffrage. She was ultimately accorded the title "Spiritual Leader of the Nation." She definitely had the personal touch and, despite her early demise at the age of 33, "Evita" Perón is fondly remembered for the profound effect she had on the people of Argentina. Today's typo Peronal* is found eight times in OhioLINK.

(Little Eva on the right, along with her sisters and brother at Carnaval de Los Toldos, 1921, from Wikimedia Commons.)