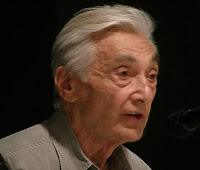 Archetypal activist Howard Zinn—author of several openly left-wing, revisionist, consciousness-raising history books—left us for good last week, borne on the wings of fellow writers Louis Auchincloss and J.D. Salinger. Achincloss had been launched into upper-crust Long Island society, and Salinger initially mixed it up in mid-town Manhattan, but Zinn was a Brooklyn boy, the son of working-class Jewish immigrants. His zeal for improving humanity, and his appeal to and love for the young, were as pure and driven as Salinger's were, yet he approached his own life differently, turning toward the masses and taking a hands-on approach to hand-wringing. The "People's Historian" taught political science at Boston University for 24 years and on his last day there ended class early so that he and his students could join a picket line. He was the recipient of many progressive awards—the Peace Abbey Courage of Conscience Award, the Thomas Merton Award, the Eugene V. Debs Award, the Lannan Literary Award, and the Upton Sinclair Award—although he also attracted his share of critics, scolds, and ideological opponents. He was a hit with radicals and a bit rhetorical, adored by the many students and others who both knew and read him throughout the years. (Matt Damon and Ben Affleck were personal friends of his and wangled some product placement for A People's History of the United States in the movie Good Will Hunting.) Rest in peace, Howard Zinn. I hope history repeats itself by giving us lots more people like you. The people's typo for today is Hitory, which appears 15 times in OhioLINK, along with six cases of Hitorical.