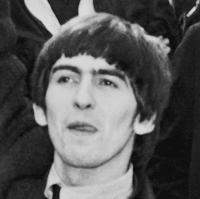 George Harrison, the "quiet Beatle," was born on February 25, 1943. He generally took a back seat to John Lennon and Paul McCartney, but George's desire for still waters seems to have run even deeper than that. He embraced yoga and meditation and mentioned in the reply to an early fan letter that "we don’t mind girls screaming in the noisy numbers, but I think we would prefer them to be a little quieter in the slow songs." Apparently, the Beatles also would have preferred not being pelted onstage with jelly beans—the best his fans could come up with after reading in the press that the Fab Four were fond of Jelly Babies, a softer British version of our own "beans." Speaking of screaming, if you can get your hands on some of these candies (originally called "Peace Babies" to celebrate the end of World War I and, since 2007, made with all-natural ingredients), you can try conducting a science experiment known as "Screaming Jelly Babies" in which you add a "strong oxidizing agent" to the confection and watch the results. (They might not be quite as dramatic with the new and improved babies, however.) Harrr* gets 17 hits in OhioLINK, which makes it a "high probability" typo on the Ballard list. It won't be a hard day's night (which, according to John, was a "Ringo-ism"), but an easy morning's afternoon, if you handle this one right away.

(Photograph of George Harrison on the Beatles' arrival in New York City in 1964, from Wikimedia Commons.)