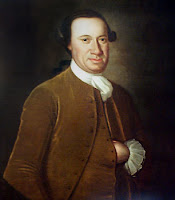 George Washington set a precedent for presidents, but, according to some accounts of history, he wasn't even our first. Formed on March 1, 1781, with the adoption of the Articles of Confederation, this nation existed for half a dozen years before the Constitution was ratified in 1789. Several different men led the country before Washington was elected, but John Hanson was the first "President of Congress" to serve a full term under the fledgling government. (An urban legend claims that our "first president" was also a black man, a misapprehension stemming from confusion with a mid-19th-century senator from Liberia by the same name.) There were nine instances of Presedent* in OhioLINK this morning, most of them typos for presidents of different sorts. Today is the day we celebrate Washington's birthday, also known as "Presidents Day." Why not be the first to correct today's typo in your catalog?

(Portrait of John Hanson, attributed to John Hesselius, circa 1770, from Wikimedia Commons.)