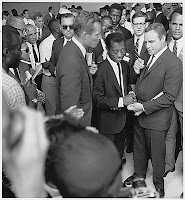 Given the titular force with which Sidney Poitier's character emphasized his name and honorific in the movie They Call Me MISTER Tibbs! (a campy 70s sequel to the classic In the Heat of the Night), he most likely wouldn't have been too happy with the misspelling Tibs either. The Poitier persona was both passionate and precise. He was also handsome, soft-spoken, principled, and the very essence of cool—perhaps especially to longingly liberal, but de facto segregated, teenage girls who were White Like Me. Over the years, I fell madly in love with Sidney Poitier (mixing the personal and political) in Lilies of the Field, A Patch of Blue, and (be still, my Lulu-imbued heart!) To Sir, with Love. Contib* turns up 76 times in OhioLINK, so let's all contribute to ridding our catalogs of this all too frequent typo.

(In case you haven't already figured it out, that's Charlton Heston, James Baldwin, Marlon Brando, and Harry Belafonte in front, plus Sidney Poiter standing a little ways behind them, at a civil rights rally in 1963, from Wikimedia Commons.)