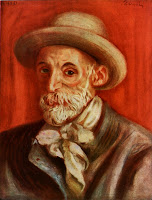 Like most senior citizens, Pierre-Auguste Renoir suffered some physical impairment in senescence, mainly rheumatoid arthritis in his hands. This condition affected him mightily (contrary to myth, he did not need to have the brush strapped to his fingers, though he did require an assistant to help him grasp it), but this did not ultimately prevent him from painting. He joined forces with a younger accomplice in order to continue sculpting and employed a moving canvas or "picture roll" to facilitate the making of oversized paintings—activities he could not otherwise manage with such limited mobility. Renoir lived from 1841 to 1919, which means he produced the charming self-portrait to the right when he was 69 years old. The artist enjoyed painting plenitudinous women as well as painting en plein air, both of which probably did a lot to keep him feeling young at heart. There are six cases of Senoir* in the OhioLINK database today (and two of Junoir*).