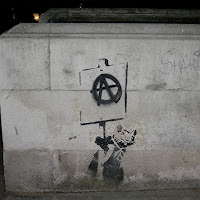 Back in my day, cops were called "pigs," but this pic of a ratty-looking little anarchist causes me to wonder if there might be cop rats (with tiny rubber bullets and wee cans of pepper spray) out there as well. Banksy is a graffiti artist believed to be from South Gloucestershire, England, and to have been born in 1974, but his real identity has long been unknown. His style is similar to that of Blek le Rat (Xavier Prou), known as the "godfather of stencil graffiti art." Regarding Blek, Banksy says: "Every time I think I've painted something slightly original, I find out that Blek Le Rat has done it as well, only twenty years earlier." We found out that there were 18 cases of Coperat* in OhioLINK today, but we're not going to cop an attitude and rat out the perpetrators. We would suggest, however, that you take a stand against bibliographic anarchy by cooperating to stamp out this typo.