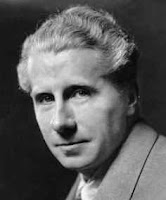 The closest I could come to a decent pun on today's typo was the mathematical term pullback. You can look it up if you like, but suffice it for me to quote directly from Wikipedia: "The notion of Pullback in mathematics refers to two different, but related processes: precomposition and fiber-product." Its "dual" (which I suppose means its opposite) is either pushout or pushforward, depending on which "notion" you're referring to. It all puts me in mind, a little, of the Doctor Dolittle character the pushmi-pullyu, a cross between a gazelle and a unicorn with two heads facing in opposite directions. (This helpfully allowed the pushmi-pullyu to eat and talk at the same time without violating etiquette: "Our people have always been very polite," says one.) There were 24 cases of Pulbic* in OhioLINK this morning. Put your heads together and push (or pull) this typo out of your own OPACs.

(Portrait of Hugh Lofting, the author of Dr. Dolittle, courtesy of Wikimedia.)