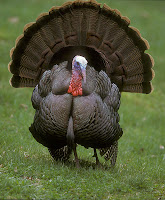 In 1991, naturalist and writer Joe Hutto got the rare opportunity to be a mother to 16 wild turkeys after a neighbor left a bowl of eggs on his front porch. Once the eggs hatched, he would spend the next year and a half guiding the youngsters to adulthood. However, as Hutto tells it, he learned more from his constant and sole companions than he taught them, coming to appreciate their individuality, curiosity, intelligence, and complex vocalizations, many of which he in time grew to understand. But most of all, he took from the relationship a profound sense of the turkeys' ability to live entirely in the moment, and the joy that experience brings.

My Life as a Turkey, the film version of Hutto’s story, was aired recently as an episode of the PBS series Nature. It was in turn based on the author’s book Illumination in the Flatwoods.

The lowest-probability typo Morther is much more rare than wild turkeys. At present, there are no entries for it in the OhioLINK database, and a WorldCat search yields only 29 hits. So don’t feel the need to spend your holiday hunting for it in your own catalog.