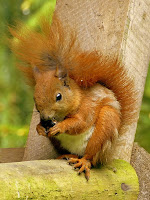 For over a century now, the Eurasian red squirrel has been gradually displaced by the Eastern gray squirrel (which is the more common squirrel this side of the pond) and is currently facing possible extinction in the U.K. Desperate and depressed over this invasive species, English squires and their ilk have begun organizing shooting parties. Red squirrels are apparently less of a nuisance than gray ones and seem to be a bit more attractive or arresting, like most redheads do. (If the one shown here isn't cute enough for you, check out this baby picture.) We have a lot of squirrels in our own backyard and, so far, we rather enjoy their antics. My companion refers to them, when they really get going, as the "Curious Squirrel Circus," a sort of rodent Cirque de Soleil. But gray squirrels, in general, are pretty naughty. They climb bird feeders, dig up flower bulbs, and worse. Just like me, though, they love nuts and forget where they put things. (They even have a name like mine: Sciurus carolinensis). Don't forget to check your catalog for today's typo, which was found five times in OhioLINK and 79 times in WorldCat.