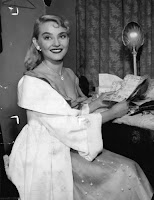 In the 1957 British comedy The Truth About Women, directed by Muriel Box and co-written with her producer husband Sydney, the simple truth is that there is no single truth when it comes to women. Laurence Harvey plays Sir Humphrey Tavistock, a long in the tooth man of the world (a baronet in the diplomatic corps) who's seemingly seen it all: from a financially independent suffragette who wants to live together without benefit of marriage (Diane Cilento) to an oppressed but highly ranked harem girl (Jocelyn Lane); a modern-minded Paris matron looking to take a lover (Eva Gabor); an American heiress with an avaricious mother (Lisa Gastoni); a talented if timorous British painter (Julie Harris); and an utterly selfless Swedish nurse (Mai Zetterling). Tavistock's maritally maladroit son-in-law prompts him to recount, via flashbacks and philosophy, his many and varied romances throughout the years. It's not a great movie, truthfully, but it is a nice premise, neatly done, and offers an interesting look at 20th-century sex roles and attitudes, especially if you enjoy British films from the 1950s—which, in truth, I do. Turth was unearthed five times in OhioLINK and 69 times in WorldCat. You can try truncating this typo as well, but as with love, be prepared for some false hits.