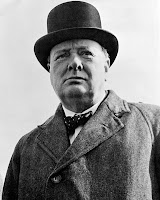 On June 18, 1940, Prime Minister Winston Churchill spoke these words in the British House of Commons:

I expect that the Battle of Britain is about to begin. Upon this battle depends the survival of Christian civilization. Upon it depends our own British life, and the long continuity of our institutions and our Empire. The whole fury and might of the enemy must very soon be turned on us. Hitler knows that he will have to break us in this Island or lose the war. If we can stand up to him, all Europe may be free and the life of the world may move forward into broad, sunlit uplands. But if we fail, then the whole world, including the United States, including all that we have known and cared for, will sink into the abyss of a new Dark Age made more sinister, and perhaps more protracted, by the lights of perverted science. Let us therefore brace ourselves to our duties, and so bear ourselves that, if the British Empire and its Commonwealth last for a thousand years, men will still say, “This was their finest hour.”

A colleague referenced Churchill’s concern about perverted science when he forwarded me a chilling article from London’s Independent newspaper. “'Super Soldiers': The Quest for the Ultimate Human Killing Machine” describes the attempts of scientists “to produce a soldier who kills without care or remorse, shows no fear, can fight battle after battle without fatigue and generally behave more like a machine than a man.” If they succeed, I wonder if anyone will call this our finest hour.

The typo Sciecn* occurs four times in the OhioLINK database. Three entries are for English-language works, while the last can be found in the title proper of a French work.