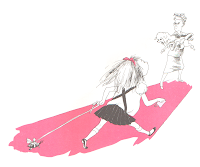 I learned the word flâneur while reading a eulogy for Martin Slobodkin (no apparent relation to Louis), the dearly departed "Boston bon vivant." The author referred to Mr. Slobodkin as having been more than merely "a man in a flaneursuit." According to Wikipedia, a flâneur is a detached pedestrian observer of a metropolis, or as Charles Baudelaire expressed it, a "gentleman stroller of city streets." There is no exact equivalent for the term in English. The concept of the flâneur is important in the work of Walter Benjamin, plays a role in academic discussions of modernity, and is also used in architecture and urban planning. "The Flâneur is typically well aware of his slow, leisurely behaviour and had been known to exemplify this state of being by walking turtles on leashes down the streets of Paris." The idea of someone taking a turtle for a walk put me in mind of Eloise at the Plaza, "the only hotel in New York," she points out, "that will allow you have a turtle." While scarcely evoking the words "slow" or "leisurely," Eloise in Paris could have been dubbed the "Frantic Flâneur," or maybe the "Flighty Flâneur." As a further point of interest, Eloise was reportedly modeled on Liza Minnelli, the goddaughter of author Kay Thompson. It occurs to me that Liza at the Plaza might have made a marginally better title for the book, but perhaps those involved felt it wiser not to be too explicit about who the heroine's "rawther" neglectful mother actually was. There were 1194 hits on Thomson* + Thompson* in OhioLINK (although some of these, of course, are bound to be cases of two people/two spellings). Walk, don't run, to your nearest library catalog to check for this typo today.