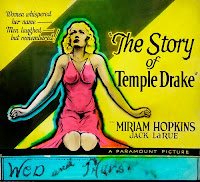 The Story of Temple Drake was considered so daring in its day that it's been credited with ushering in the Motion Picture Production Code (also known as the Hays Code), or at least affording it the clout needed to effectively censor the movies. It's based on the William Faulkner novel Sanctuary and stars the evanescent and eponymous Miriam Hopkins, along with a great cast overall, including the sexily thuggish Jack La Rue. Hopkins plays a "hedonistic" young woman, granddaughter of the town judge and a bit of a tease (found written on a restroom wall: Temple Drake is just a fake. She wants to eat and have her cake). She's a good-hearted good-time girl, though, who simply prefers partying to being some man's property. In what is perhaps the first cinematic deployment of "It's isn't you, it's me," Temple rejects a marriage proposal by adding: "It's just me ... it's something inside me ... it's like there's two me's..." Of course, there's much much more to this "1933 scorcher," which, according to TCM guest host Michael Phillips, "gets more evildoing done into seventy minutes than most films can come up with at twice that length." A search on Productin* (for production*) produced 27 hits in OhioLINK and 855 in WorldCat.

(Glass slide advertisement for The Story Of Temple Drake, courtesy of Jeff Bridges on Flickr.)