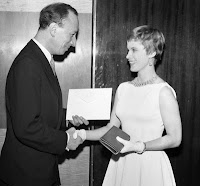 Back when I was in high school, I would earn some extra pocket money by working at the town library a couple of nights a week. In the 1960s and 70s, public libraries were often a lot smaller than they are today, and as I languidly rolled my cart to and fro throughout the tiny, but somehow still airy and sunlit rooms, carefully returning the books to their assigned places on the shelves, I gradually came to know the contents of those shelves fairly well. One day an intriguing-looking paperback with stunning black and white photographs caught my eye. It was entitled Four Screenplays of Ingmar Bergman and as I stood staring at it in the dusty stacks, it couldn't have seemed more wonderful. It was like falling down a rabbit hole and stepping through the looking glass. Darkly. All about death and chess and summer nights and strawberries, it served as my introduction to the world of foreign films. To this day, whenever I think about Ingmar Bergman, I remember reading that book, even more than I do seeing the films themselves. One actress who is often seen in the films of Ingmar Bergman is Bibi Andersson. Born in 1935 in Stockholm, Andersson appeared in more than ten Bergman films, including The Seventh Seal, Wild Strawberries, The Magician, and Persona. Her first collaboration with the master, however, occurred in 1951 when they did a commercial together for a laundry detergent called "Bris." (Apparently, this means something different in Swedish than it does in Jewish. Just kidding. It means "breeze.") We logged 17 cases of Bibilog* in the OhioLINK database today, and 1,178 in WorldCat.

(At the Skandia Cinema, Bibi Andersson receives Mr Engdahl's scholarship of SEK 2000 by Gunnar Sjöberg in conjunction with the premiere of "Summertime Wanted" [i.e., Smiles of a Summer Night?], December 21, 1957, from Wikimedia Commons.)