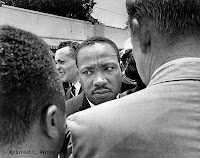 Whither are we going with our typo for the day? Wiht* is the sort of typo that can signal more than a single word, in this case both with* and whit*. The legacy that photographer Ernest Withers (1922–2007) might have otherwise earned from both black and white Americans alike has predictably withered on the vine in the wake of disturbing reports that he allegedly doubled as a paid informant for the FBI concerning the movements of Dr. Martin Luther King and others. With all due respect, and while the pictures of the civil rights movement captured by Withers are obviously priceless, Dr. King also paid a very high price for being the target of a covert government operation during the 1960s. We uncovered 114 examples of today's typo in OhioLINK and "too many records found for your search" in WorldCat.