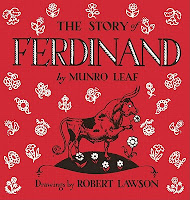 Talk about seeing red! In Munro Leaf's timeless tale The Story of Ferdinand, the peace-loving bull does not react to that provocative color the way a Spanish bull is supposed to do, choosing instead to simply stand (or sit) his ground and smell the roses.* Various dictators and other blowhards (er, notables) were hopping mad, however. Hitler burned the book, Mussolini banned it, Ernest Hemingway even wrote a rather weird rebuttal to it ("The Faithful Bull") in 1951. Some leftists (anti-Fascist Loyalists) took issue with Ferdinand's pacifism as well. Since the book came out in the fall of 1936, just after the outbreak of the Spanish Civil War, many readers and critics saw an overtly political message in it. But Munro Leaf consistently maintained that he had merely written an innocent children's story (albeit one promoting peaceful coexistence and being true to oneself) for his friend and would-be illustrator Robert Lawson to draw pictures for. Like most targets of censorship, The Story of Ferdinand would become an instant classic and Lawson's illustrations are considered among the finest in all of modern children's literature. Ferdinand is not easily riled, but like all of us, would undoubtedly like it if we spelled his name right. There were 11 instances of Ferdinad sitting in OhioLINK this morning, and 280 in WorldCat.

* Actually, it's not the color, but the motion, of the matador's cape that excites the bull. Ferdinand just preferred flowers to flags.

(The Story of Ferdinand by Munro Leaf, courtesy of Wikipedia.)