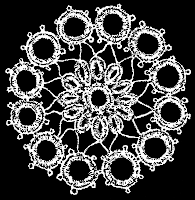 Tatting is a term of art found in the domestic sphere. It refers to "handmade lace fashioned by looping and knotting a single strand of heavy-duty thread on a small hand shuttle; the act or art of making such lace." Since its origin is unknown, it's hard to know if it's related to the word tattle, which, seeing as how we were all children once, is a word most of us know all too well. (But if somehow you don't, I won't tell.) Interestingly, its derivation is given as "Middle English tatelen, to stammer, probably from Middle Dutch, of imitative origin." I am fully capable of tattling, as well as stammering, but I'm pretty sure I couldn't produce a piece of lace like the one shown here, even if I tried my best to imitate it. One might wonder as well whether these words are connected to the phrase tit for tat, but it turns out that that's more of a guy thing. It means "a blow or some other retaliation in return for an injury from another." (I think I'd rather have a doily, thanks.) Another cool word for someone who's possibly been in a fight and torn his clothes (perhaps thereby exposing his tattoos) or simply one who can't afford to be wearing a lot of lace and the like, is tatterdemalion. Today's tattered typo is considered to be "high probability" on the Ballard list, with 62 cases in OhioLINK and 1,326 in WorldCat. Please take the initiative to initiate a search for this one in your own library's catalog this morning.

(Crochet lace, an example of tatting, from Wikimedia Commons.)