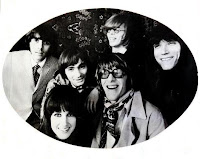 "Lather was thirty years old today, they took away all of his toys. His mother sent newspaper clippings to him, about his old friends who had stopped being boys..." For some reason, this long-ago lyric came to mind over the weekend, but I guess I hadn't been "feeding my head" enough that day because I couldn't recall the 1960s rock band responsible for it. (Unfortunately, my computer happened to be down at the moment as well, so I wasn't able to simply "google" up the answer.) Worst of all, I couldn't even remember the first word, the name of the eponymous person the song was about. "I think it's something sort of ... soapy," I told my friend. But that was as far as I could get with it. When I got to work Monday morning, it was the first thing I looked up. The song is called "Lather" and it's by Jefferson Airplane. (Of course.) It appears on the 1968 album Crown of Creation and was written by band member Grace Slick. She claims to have been inspired by a two-year affair she'd been having with the Airplane's drummer, Spencer Dryden, who had recently turned thirty. As for why Slick dubbed the song's Peter Pan-like character "Lather," that remains a bit of a mystery. Is it a reference to a child's bathtime; evidence of some sort of neurological or developmental disorder ("Lather came foam from his tongue"); or perhaps anger and agitation at the prospect of growing up? Who knows? Maybe its meaning is something else entirely, or nothing much at all. It's an interesting thing to think about, but don't get yourself into a lather over it. I am well over thirty myself these days, but you can trust me when I tell you that there were fifty examples of today's typo in OhioLINK and 466 in WorldCat.