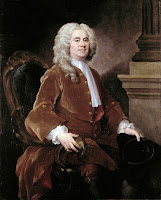 Happy Pie Day! By the way, and by a sheer and happy coincidence, I baked a berry pie yesterday consisting of thawed organic blueberries, strawberries, raspberries, and blackberries. It turned out totally amazing! The flavor was exquisite, the crust perfect. Even the whipped cream was beyond reproach. Wholesome and digestible enough for both infant and infirm alike. Pies rule! But you know what really rules? Pi. You know, pi, the number that never ends? The ratio of the circumference of a circle to its diameter? The "irrational" number that just doesn't know when to quit? 3.14159265358979 .... ad infinitum. The mathematical version of infinity. Today is actually Pi Day, so called because March 14th and the number pi both suggest the numerical cluster 3-1-4. Pi itself goes back a very long way, but as for where the number got its name, that was the idea of Welsh mathematician (and probable pie aficionado!) William Jones, who in 1706 proposed the use of π (the Greek letter pi) to represent the word perimeter (περίμετρος), or possibly an abbreviation for "periphery/diameter." Whichever pi/e you prefer, enjoy this most infinitely delectable day. There were 21 cases of Infint* in OhioLINK and 316 in WorldCat.

(William Jones by William Hogarth, 1740, courtesy of the National Portrait Gallery and Wikipedia.)