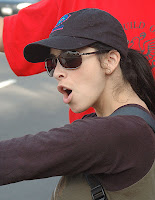 Birds do it, bees do it, even teens out in AZ do it... Let's do the time warp again! Somebody should make a T-shirt, button, or bumper sticker that reads: "Arizonans do it in the fourth dimension." According to the latest foray in the War on Women, a bizarre bit of Arizona legislation now makes the claim that "pregnancy" begins at two weeks before conception. A concept that's truly hard to conceive. Comedian Sarah Silverman recently posed for supposed before and after photos, saying that she had decided to get a "quickie aborsh" before it was too late. I understand the politics behind this new Arizona law, and the way it works to limit options and access for women and girls, and I'm offended and outraged by it. However, what I really can't get over at the moment is the Orwellian/Carrollian aspect here. Was Humpty Dumpty right? Do words simply mean whatever we want them to? Do words, like more and more women these days, have no actual agency of their own? Is it really possible to be a "little bit" pregnant? (The questions are flooding my gobsmacked mind.) Do people lose their virginity two weeks before they have sex for the first time? Is a baby born two weeks before it leaves its mother's womb? Do governors and legislators in Arizona speak two weeks before they think? I think the answer to that one is obvious. There were 22 cases of Conciev* in OhioLINK, and 283 in WorldCat.

I've been meaning for weeks to say what a great post this is.

BTW, the confluence of these bits of legislative rape, the Stepford wife of the presumptive Republican nominee for our highest office and her inciteful pronouncements, and the placement of the 3 50 Shades novels on the NYT bestsellers list (did you see that E L James credits Stephanie Meyers--STEPHANIE MEYERS!--as her muse?) has me gobsmacked.