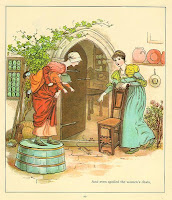 As if New York City didn't already have enough of a vermin problem, there are all those corporate rats on Wall Street to worry about now too. If the whole thing wasn't quite so tragic, it would really be sort of funny—lots of stuffed shirts and puffed-up suits taking constant pratfalls, rather like Keynesian Keystone cops racing cluelessly around on the silver screen. Nothing more than piggy little Kermits (it's not easy seeing green), they have the "I know you are, but what am I?" gall to call their clients "Muppets." The love of money is the route of all evil, but the bankers and their corporate shills aren't feeling a lot of love lately. The business of evil is instead finding its well-worn path rerouted by the Occupiers. However, it's not enough to jump up on a soapbox and start screaming. The rats have too many (loop)holes in which to hide their loot. Hearts and minds need to be changed, and so does the law of the land. There were 67 instances of Coporat* in OhioLINK and 993 in WorldCat; we also found nine, and 98, cases of Corprat*.

(Illustration from The Pied Piper of Hamelin, ca. 1888, from Wikimedia Commons.)