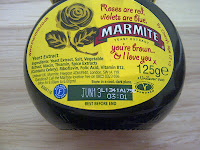 Not everything needs a label, but most things have (and often should have) one. In any case, if you plan on labeling something, you should at least try and make sure it's spelled right. One thing that probably does need a label is Marmite as it might be a little hard to tell what it is without one. Besides, the label on this blackish, brackish, spreadable sticky stuff is actually rather charming: "Roses are red, violets are blue, Marmite, you're brown... & I love you." Apparently it was designed "by Cheryl, age 17 ½." The label also includes a list of ingredients (which kind of reminds me of Woody Allen's request for "alfalfa sprouts and a plate of mashed yeast" in the movie Sleeper), a note that says "with extra folic acid" (in case you've got a new little Marmite eater on the way) and a stamp including both date and exact time packed (e.g., 3:01), followed by the somewhat intriguing advice: "Best before end." Any more questions? You can call the "Marmite loveline free ... Mon–Fri 8.00am to 6.00pm." Though the delectability of Marmite is somewhat debatable (the British company's advertising slogan is remarkably forthright: "Love it or hate it"), I personally know a couple of moderately finicky eaters who nevertheless relish the stuff. There were six wrongly labeled cases of Lable* + Label* in OhioLINK today, and 231 in WorldCat. Lable* by itself yields 29 hits in the former (around a dozen of which were for personal names, such as Lablénie, Lablée, Lable, and Labler, as well as the acronym LABLEX) and "too many records found for your search" in the latter.

(Back label on present UK's Marmite jar without information about supposed glutamic acid-rich character of the yeast extract inside, February 2012, from Wikimedia Commons.)