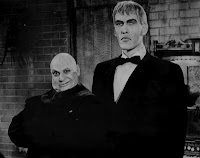 Today is Friday the 13th, so it's high time for a spooky blog entry. When it comes to creep comedies like The Addams Family and The Munsters, people can be surprisingly partisan. I remember the time TVLand sponsored a survey as to which family of monsters their viewers liked best. There's a lot to love in both of them, but for some it may come down to the kids and which ones you find most appealing or relatable. Wednesday Addams and Eddie Munster were both cute as buttons, but some folks prefer female children, others male. As Lewis Carroll famously put it: "I am fond of children (except boys)." (It occurs to me that the third child, Pugsley, looked a little bit like Tweedledum and Tweedledee!) I always appreciated the conceit of Marilyn Munster (a pretty blonde) being considered the "Ugly Duckling" in her household (kind of like that classic Twilight Zone episode in which the attractive-looking woman is undergoing normalization at the hands of some ghoulish surgeons). But who didn't enjoy watching Gomez Addams flamboyantly kissing his wife Morticia's arm while murmuring "Cara mia"? Speaking of appendages, there was also the disembodied butler, Thing. And then, of course, there was Cousin Itt, a rather small, but utterly hirsute and, according to Wikipedia, "carefree bachelor with an extravagant lifestyle." Itt even managed to carry on something of an affair with Morticia's sister Ophelia. There were six hits on Itme* in OhioLINK this morning, but only three of them were typos for the word in question. The other three comprised a correct Latin spelling; the surname Itmer; and a typo made by omitting the space between the words it and means ("This is what itmeans to say Phoenix, Arizona" by Sherman Alexie). There were 373 matches on WorldCat as well. Hopefully, your luck today will be good and you'll uncover a few of these items in your own catalogs.