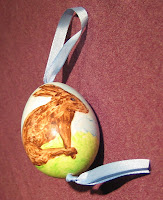 I hope you all had a nice Easter/ Passover weekend and are now getting ready for a new season of rebirth and renewal (as well as the all-important "reducing, reusing, and recycling" that goes with any good spring cleaning). Fortunately, Easter eggs can be consumed in a variety of ways and their shells may be added (assuming natural dyes, like spinach, beets, and onion skins, have been used) directly to your compost heap. So why is the Christian holiday that celebrates the resurrection of Jesus Christ (a "moveable feast" falling on various Sundays from March 22 to April 25) called "Easter"? And why is there a "Bunny" in charge? And what, after all, do rabbits have to do with eggs? According to neo-pagan legend, the springtime goddess Ostara (who some claim is etymologically linked to the word estrogen) came upon a bird whose wings had gotten frozen in the ice, so she sympathetically turned him into a "snow hare." She also granted him the ability to lay eggs in rainbow colors, but only once a year. (If birds can become rabbits and males can lay eggs, I suppose eggs can grow on trees as well. Anyway, it's fun to pretend.) Egg decoration is a form of messy child's play in some places, but a delicate and dedicated high art in others. While eggs are dyed and painted for Easter all over the world, countries such as Bulgaria, Croatia, Hungary, Latvia, Lithuania, Lebanon, Macedonia, Romania, Serbia, and the Ukraine seem to produce the most beautiful ones. They hold the annual championship in something known as "egg tapping" (also referred to as "shackling," "jarping" or "dumping"). I'm not sure what we called it, if anything, but we used to play this game at my house too. It's an interesting experiment, really, almost a Rorshach test of sorts. Do you tap lightly so as not to crack your own shell? Or hard so as to crack your opponent's? Today's typo was tapped five times in OhioLINK and 24 times in WorldCat.

(Easter egg with Easter hare painted on it, April 2006, from Wikimedia Commons.)

Posted by librarytypos at 9:47 AM