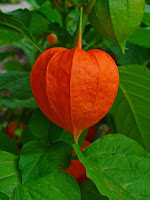 The conservative assault on Planned Parenthood and current rollbacks to women's reproductive rights in general will likely give rise to some creative, if rather dangerous, alternatives. Women, after all, have been managing to limit their family size, as well as to obtain abortions, for centuries, regardless of the legal status of same. When fainting and falling down stairs and so on didn't have the desired effect, there were any number of herbs that could act as an abortifacient, such as pennyroyal, nutmeg, mugwort, etc. And perhaps even more of them that proved effective as birth control. The lovely, yet pernicious, weed pictured here is called Chinese lantern: "Its balloon-like qualities also made it a contraceptive in early Japan." Although my mother never warned me about the failure rate of similar methods, she did advise me not to plant Chinese (aka Japanese) lantern in my yard. It's quite invasive (much like the Religious Right) and difficult to defeat once it's gained ground in your garden. There were three cases of Contacep* in OhioLINK and 30 in WorldCat. Try and rid your databases of this unwanted typo should you happen to find it cropping up there.