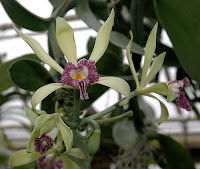 Most of us recognize vanilla in the form of the familiar, almost medicinal-looking bottle of extract found in practically everyone's kitchen cabinet. However, the wonderfully scented spice also comes as a skinny brown bean pod, as well as a rather luridly lovely member of the orchid family. Oddly enough, the word vanilla has also become synonymous with "bland" or "boring," especially as contrasted with chocolate, which of course is totally unfair. Like the color white, which is not the absence of color, but a combination of all the colors, vanilla ice cream, for example, is not simply some default version of the milk-white dairy product; it simply has the good manners and breeding not to make its presence too obvious. Vanilla possesses a strong and marvelous flavor of its own, but the "plain ol' vanilla" label pejoratively lingers. Let me be perfectly clear, though. I love chocolate (its taste, texture, mood-altering qualities, and checkered past), but when it comes to ice cream, I'm still going to have to go with vanilla. Not only is it just as flavorful, but a little bit of extract and some grated vanilla beans far better preserve the consistency of ice cream than does a large dose of cocoa powder. Even chips and chunks of chocolate do not fare as well in there as one might otherwise hope: the colder chocolate gets, it seems, the less it tastes (and feels) like chocolate. So maybe it's high time we vanilla-philes take a little pride in our preference and lose our "banal, flavorless, humdrum, insipid, vapid, wishy-washy" image. We extracted eight cases of Extact* (and six of Extarct*) from OhioLINK, and 128 and 20, respectively, from WorldCat. Nearly all of them seemed to be typos for extract*, but you may find a few for words like exact* as well.