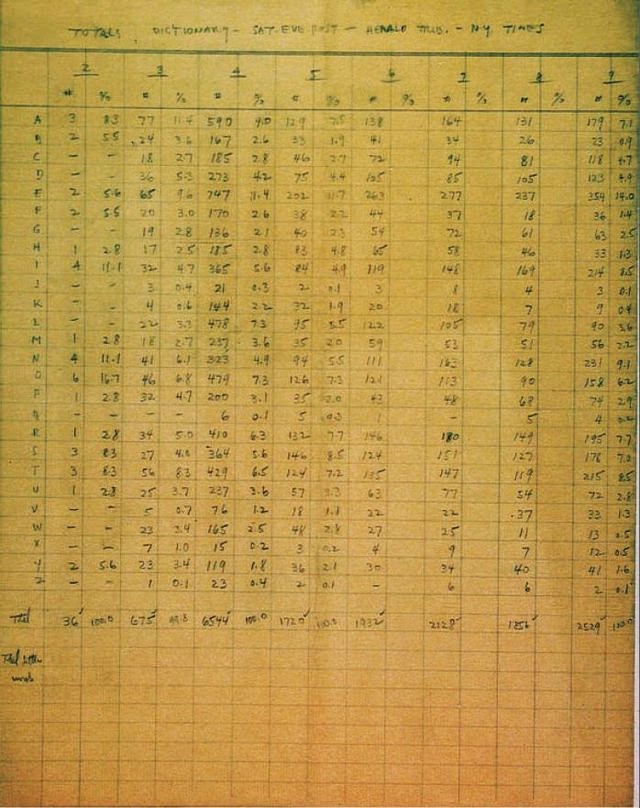 It's kind of funny how many times I've blogged about Scrabble here already, but here we go again! Today is National Scrabble Day, a time to remember one of the all-time best board games in history. Its inventor has the inventive-sounding name Alfred Mosher Butts, which makes me think of those fake "porn names" you create by combining the name of your first pet with the street where you lived. (Mine is "Mitzi Mosher," which sounds a little like a long-in-the-tooth showgirl played by SNL's Molly Shannon: "I'm fifty! Fifty years old!") The game was conceived during the Great Depression and by the late 1940s was helping to lift Americans out of theirs. After considering the names "Lexiko," "It," and "Criss Cross Words," Butts finally decided to go with "Scrabble," which means "to grope frantically" (from the Dutch word Schrabben, to scrape or to scratch). Mr. Butts also has an interesting back story (no porn pun intended). Born in Poughkeepsie, New York, on April 13, 1899, he became an architect as well as an "amateur artist"; six of his drawings were acquired by the Metropolitan Museum of Art. Butts was living in Jackson Heights when he first came up with the idea of Scrabble, a blend of "number games" (like dice and bingo), "move games" (like chess and checkers), and "word games" (like anagrams). In honor of his literate invention, a street sign at 35th Avenue and 81st Street in Queens, using stylized letters including their Scrabble values in subscript, was installed in 1995, but mysteriously disappeared in 2008. It was replaced in 2011, although it isn't known for sure who put it up in the first place, nor who later took it down. "On a neighborhood blog," wrote the New York Times, "one person suggested it had been moved to a corner with a triple word score." We scored big today with the typo Baord*, which turned up 15 times in OhioLINK, and 287 times in WorldCat.

(Original chart devised by Alfred Butts to tabulate the frequency of letters in words of various lengths, using examples from a dictionary, the Saturday Evening Post, the Herald Tribune, and the New York Times, to design the game of Scrabble, from Wikimedia Commons.)