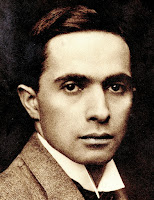 A couple of friends and I went over to the Norman Rockwell Museum in Stockbridge recently to check out the new J. C. Lyendecker exhibit. It was interesting to view this illustrator's work in the context of his protégé, friend/frenemy, colleague, and competitor Norman Rockwell, along with that of his own brother, F. X. Lyendecker. All three men illustrated covers for the Saturday Evening Post (Rockwell: 321; Lyendecker: 322). The Lyendecker brothers were both homosexual and helped to define the commercial aesthetic of their day. J. C. Lyendecker was the longtime companion of model Charles Beach, otherwise known as the Arrow Collar Man, and so sexy an advertising icon that he was reputed to have gotten more fan mail from women than Rudy Valentino. Some people feel that Norman Rockwell himself was potentially gay or bisexual; this point, however, is hotly disputed. Rockwell, who seemed to prefer painting men and boys over women and girls, had three less than ideal marriages, along with three children, to his name. There were 156 hits on Illusta* in OhioLINK, and "too many records found for your search" in WorldCat.
(J. C. Leyendecker, American artist and illustrator, from Wikimedia Commons.)