Stret + Street (for Street or Stret) 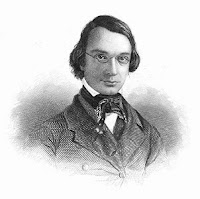 Alfred Billings Street has been referred to as the "State Poet-Librarian of Albany," a lovely-sounding if informal moniker for a man who was not only the New York State Librarian from 1848 to 1862, along with being the State Law Librarian until 1868, but was also a lifelong wordsmith. (He was once gently mocked as "the forest child in shape of ALFRED STREET!" by Edgar Allan Poe in his pseudonymous book The Poets and Poetry of America: A Satire). Ironically named, perhaps, Mr. Street was an evident nature lover and rather romantic bard to boot. In Frontenac: Or, the Atotarho of the Iroquois; a Metrical Romance, he wrote:
Sweet, sylvan lake! that isle of thine
Is like one hope through grief to shine;
Is like one tie our life to cheer;
Is like one flower when all is sere;
One ray amid the tempest’s might;
One star amid the gloom of night.

A portrait of Alfred Billings Street, by Asa Twitchell, currently hangs in the Librarians Room at the New York State Library in Albany, where it joins that of Melvil Dewey and a couple other former State Librarians. There were eight instances of Stret + Street (for street or stret) found in OhioLINK today, and 172 in WorldCat. You may turn up a few correctly spelled non-English names and words with this one, but you should also find some genuine typos here.