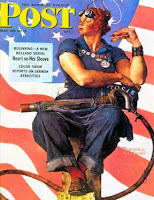 I blogged the other day about the Norman Rockwell Museum, mostly about its current exhibit of the work of J.C. Lyendecker, an artist who, like Norman Rockwell, did a lot of magazine covers. One of Rockwell's most memorable covers was of "Rosie the Riveter," whose name was taken from a popular song and who symbolized the many American women working in factories during World War II−thereby supporting both the economy and our fighting men abroad. Rockwell's model for "Rosie the Riveter" was actually a 19-year-old telephone operator named Mary Doyle Keefe, from Arlington, Vermont. The painter, who lived nearby, persuaded his young neighbor to pose for him and the resulting picture appeared on the cover of the Saturday Evening Post on May 29, 1943. Although J. Howard Miller's morale-boosting factory poster from around the same period (it got a boost itself from feminists in the early 1980s) is arguably even better known than the original Rockwell cover, both images are commonly referred to as "Rosie the Riveter." Miller's "Rosie" may have done more for the female upper arm than Michelle Obama, while her upraised fist was a call to arms of another sort. Rockwell's "Rosie" sports a sandwich in her hand and a sneer on her face; her feet are planted on a copy of Hitler's Mein Kampf. Rockwell claimed he modeled his riveter on Michelangelo's Isaiah, from the ceiling of the Sistine Chapel. He later told Keefe she was the most beautiful woman he'd ever seen and apologized for his rather unflattering portrayal of her, explaining: "I did have to make you into a sort of giant..." The inspiration for that American giant of wartime and women's iconography, Mary Doyle Keefe, passed away yesterday at the age of 92, in Simsbury, Connecticut. The typo Normon* (for Norman*) occurred 18 times in OhioLINK, and 317 times in WorldCat.
(Rosie the Riveter as depicted by Norman Rockwell in the Saturday Evening Post, 1943, from Wikipedia.)