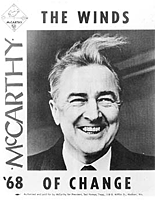 He was called "Clean Gene" when he ran for president in 1968 and, although he wasn't swept to victory, Eugene McCarthy's squeaky-clean political reputation has persisted to this day, and is attested to by a 2001 PBS documentary short entitled I'm Sorry I Was Right. As a teenager, I got to say "Hi, Gene" at a Democratic primary rally in upstate New York. The Ballard list includes numerous variations on this typo, ranging from "moderate" to "lowest" probability: Hygenic, Hygein*, Hygience, Hygene, Hygenist*, Hygeien*, and Hygient*. Progressive, pacific, poetic, and prolific, Senator McCarthy went on to his final reward in December 2006, leaving the rest of us to pine soulfully for the days when it still seemed possible to clean House in Washington.