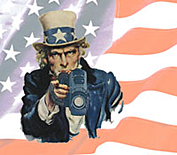 In last week's blog entry for Ameeri*, we "did not recall" that there were plenty of other anti-American typos as well. The usual suspects, deemed "high probability" risks on the Ballard list, include: Ameica*, Amerca*, Amercia*, Ameria*, Americam*, and Americn*. All of these are worth keeping an eye on. The following variants should be surveilled as well: Aamer*, Ameirca*, Amercic*, Amereic*, Ammeric*, and Americs. Whether you consider Ralph Nader a true American or a traitor to his country, it's interesting to note that, according to the film An Unreasonable Man, Nader shot to national prominence after noticing one day that he was being followed and chatted up (they didn't have camcorders back then) by a GM snoop hired to dig up some dirt on the celibate and single-minded crusader. While some feel Nader reached his nadir in 2000 when he stubbornly insisted on running for president, it's clear that he holds himself to a very high standard and, in our own small way, we should try and do the same. A snapshot taken of alien Americans in my library's catalog today exposed at least 30 of these typos.