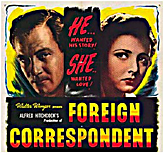 A “high probability” typo on the Ballard list, Correspondan* occurs 253 times in my library’s OPAC and 2,613 times in OhioLINK. Those high numbers, however, reflect the fact that this is not always, or even typically, a typo—as the French and English spellings do not correspond. In English, it's correspondence and correspondent; in French, it's correspondance and correspondant. (No wonder I’ve often hesitated over the endings to these words. In fact, if you ever get one of them in a spelling bee and mistakenly spell it with an a, I encourage you to cry "Vive la différence!" as you retreat to your seat. It may not make any difference in the long run, but it might improve your joie de vivre or esprit de corps.) Of the 253 records reported in my own catalog, most contained subject headings in both languages, hence two separate spellings, although 50 or so were actual English typos. To facilitate the culling process, you may want to try limiting your search to English-language records—but note that those can also harbor French words and subject headings. And be sure to check your sources for any transcribed fields.