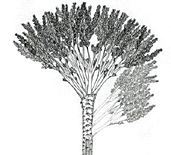 Don't worry, I'm not gonna quiz you on the spelling of the World's Oldest Tree (Wattieza) today, but you should start seeing its name (and likely typos for it) a lot more often now that it's finally been found—after 380 million years—by a couple of employees at the New York State Museum in Albany. They've been credited for their amazing find, the fossil remains of treetops belonging to the "Gilboa stumps" (unearthed around 1870), by the scholarly journal Science, putting Schoharie County on the international paleobotanical map. Once upon a time, Wattieza spanned the globe in a fantastically foresty way, but your job today is to root out the typo Foresty (for forestry) from your own library's catalog. OhioLINK uncovers 17 of these, landing it in the "high probability" section of the Ballard list. (Drawing of Wattieza by Frank Mannolini of the State Museum, published in Cosmos magazine.)