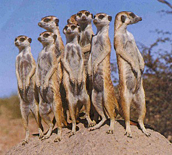 While I could have illustrated this entry with a picture of a Middle Eastern prince, or Snow White's looking glass, or a soupçon of ... something, I decided instead to go with the cutest animals to have their own reality show, Meerkat Manor. Despite their "mob" mentality, meerkats (a type of mongoose) stand tall and proud, just like a lot of Americans. So don't go spelling it meercat, Buster. In fact, if meerkats could read, they'd probably make great proofreaders, given how hilariously hyper-vigilant they are. Ameeri* (for America, etc.) is a "high probability" typo on the Ballard list, popping up 24 times in OhioLINK. (Now, if those were meerkats, would that be two dozen mongooses or mongeese?)