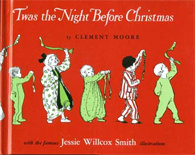 In 1823 a poetic ms. entitled A Visit from St. Nicholas (more commonly called Twas the Night Before Christmas) was published anonymously in the Troy, New York, Sentinel, just over the river and through the woods from here. It was long assumed to have been the work of Clement Clarke Moore, who lived in New York City and taught Greek and Oriental literature at Columbia College. He was also made professor of Biblical learning at the General Theological Seminary, for which he donated the land. I'm not quite sure why he was thought to be the author of this poem—he just was. But if you really must know, the story got started by a Charles Fenno Hoffman in 1837 and soon after that A Visit from St. Nicholas was published under Clement Moore's name. In 1860 its origins were challenged by the Livingston family, and in 2002 the Britannica and Columbia encyclopedias coolly informed us: "Recent computer-aided scholarship has cast considerable doubt on Moore's authorship of the poem ... In 2000 it was determined that the poem was probably the work of Henry Livingston, Jr." It's sort of like being told there's no Santa Claus. But thanks, Henry. And you too, Clement. And you too, Mr. and Ms. Claus. Happy Christmas to all, and to all a good night! (Oh, and there are six cases of Christms in OhioLINK.)

(Twas the Night Before Christmas, by Clement Moore, with pictures by Jessie Willcox Smith, 1912.)

Hi,
The challenge to Moore's authorship came in the form of a book by Prof Don Foster titled Author Unknown. The book offers circumstantial evidence only and has been questioned by other scholars. During his lifetime Dr. Moore claimed to be author, published the poem himself and had no reason to be untruthful. -Bruce Parker, General Seminary