"Education: that which reveals to the wise, and conceals from the stupid, the vast limits of their knowledge." This was said 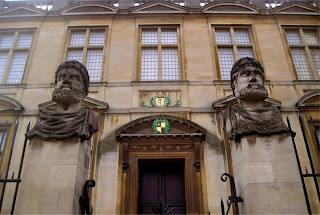 by Mark Twain, who had to leave school at a young age to help support his family after the death of his father. Twain also said that he never let schooling get in the way of his education, and he learned enough to hold his own in any conversation with leaders and scholars. Educaton is a classic case of a missing 'i' at the end of a long and very familiar word. This is found in the 'B' or high probability section of Typographical Errors in Library Databases. This morning, there were 375 hits in WorldCat for the error. Interestingly, 8 out of the first 10 shown had Educaton in the main title field.

Today's photo shows the giant heads of Greek philosophers near the entrance to the Bodleian Library. The original can be found at