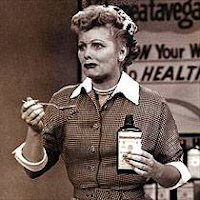 With five servings of Vegtable* in OhioLINK, today's typo comes under the rubric of "That's How It Sounds." However, if you think the word vegetable is hard to pronounce, try saying it while feeling loose and being Lucy. "I'm your Vitameatavegamin Girl!" she says on the first take, while taking a swig, and it's all downhill from there. In 1936, Ball registered to vote in the Communist Party primary at the behest of her socialist grandfather, and was made to revisit this notion 17 years later when she got hauled before HUAC to 'splain herself. On an episode of I Love Lucy around that time, Desi Arnaz skipped the usual audience warm-up and instead recounted this story, adding: "The only thing red about Lucy is her hair, and even that's not legitimate." Then he brought out his wife, who received a standing ovation. Apparently, Lucy was not unpoopular, even if she did pop out of the Party.*

*Alcohol-based spoonerism for: "Are you unpopular? Do you poop out at parties?"