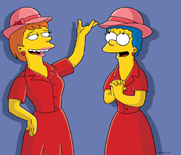 Which is more ridiculous, a red chapeau or a blue beehive? Marge Simpson's got both, but keep that under your hat. OhioLINK's got seven cases of Rediculous, making this a "low probability" typo on the Ballard list. That E (before I) may be due to a tendency on the part of some people to pronounce this word "Ree-diculous." The Red Hat Society was founded in 1998 by Sue Ellen Cooper, who gave her friend a red hat from a thrift store on her 55th birthday, along with a poem that begins: "When I am an old woman I shall wear purple, with a red hat that doesn't go and doesn't suit me."