“It is not hard to understand modern art. If it hangs on a wall it's a painting, and if you can walk around it it's a sculpture,” according to Tom Stoppard. Public sculpture has endured worse criticism over the years - usually from pigeons. Sculpture has been a favorite in these pages before, and provides us a respite from the usual diet of missing vowels. Scultpure is found in the 'C' or moderate probability section of Typographical Errors in Library Databases, meaning that the error was present at least 8 but no more than 15 times in OhioLINK at the time of its discovery. There were 99 hits in WorldCat this morning. Since they display in relevance order, the first display screen showed records with the offending term in the title. It caused barely a ripple in Google - just over 50,000 hits. As in all inverted letter typos 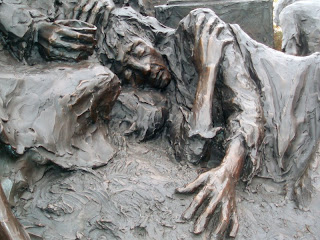 (or at least every one we've seen), the two letters involved in the mistake are on opposite sides of the QWERTY keyboard.
Today's photo is a detail from the Irish Famine Memorial in Philadelphia. The original can be seen at http://www.pbase.com/terryballard/image/70117827
Posted by librarytypos at 11:50 AM